In a previous post we looked at 2 common Physiological Causes of Anxiety.  That article looks specifically at the role of hormones and biogenic amines on anxiety.  Here we will at the role of digestion, nutrition, and addictive substances as physiological causes for anxiety.

Digestive Problems Can Be a Physiological Cause of Anxiety

This is more apparent and obvious in people with that have Irritable Bowel Syndrome (IBS).  It is probably because a lot of times people with IBS do have inflammation.  The brain receives the message that there is inflammation in the digestive tract. The brain then see's this as a signal that the body is under attack and it needs to do something about the inflammation.  As a result it produces more cortisol.  You will feel that in your body and sometimes - in the gut. 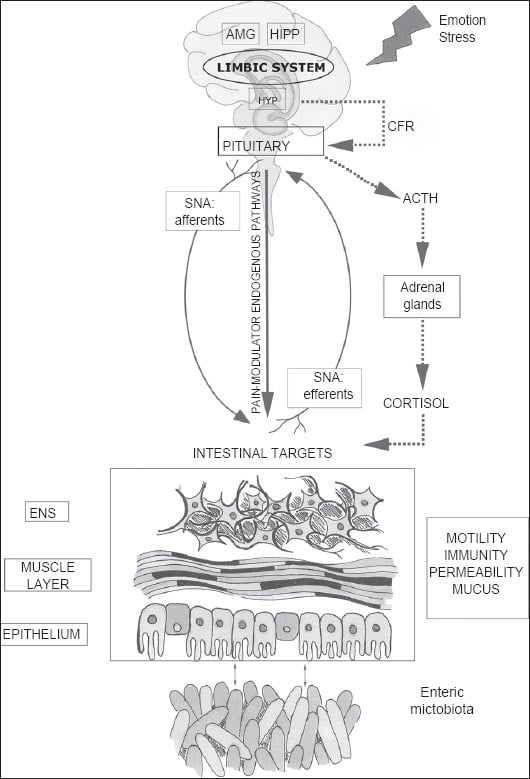 The pituitary gland can also use the information from the digestive tract to send out signals to the rest of the body via its actions on different glands.  The pituitary gland is always producing hormones like ACTH, TSH, etc. These are hormones that stimulates the adrenal glands to produce cortisol (and other adrenal cortical hormones) and thyroid to produce thyroid hormones.   When your body or specifically the pituitary is getting the signal of more stress or more threat in the external environment, it will produce more of ACTH.  Because the ACTH cause more production of cortisol that causes more fight-or-flight activity.  This is the feeling that a lot of people experience when they have anxiety or anxious states.  This is the connection that could be coming from something going awry in the nervous system here.

Basically any part of this multi-input feedback system can signal that there is a threat to your body.  It could be that there is inflammation in the digestive tract for one reason or another.  This signal is getting fed back up to the pituitary and then cortisol spikes. Then the cycle repeats itself.  Keep in mind, this is a simplified version of what is actually going on.

As you can see, this relationship between the digestive tract and the brain is fairly complex with a lot of moving parts making it hard to isolate which thing might be starting the cascade.  There is a lot of communication going on here and a lot more research needs to be done.  You can read more about this relationship between the Gut Brain Axis here.

Substances of Abuse As a Physiological Causes For Anxiety

The fourth physiological cause of anxiety has to do with addiction and withdrawal from substances of abuse or the like.  These substances can cause anxiety especially when your body has established a tolerance to them and they are taken away (ie withdrawal).  A common example is when you consume lots of alcohol.  The next day or even a few hours later after stopping the alcohol, you feel anxious.  It is common for instance to wake up in the middle of the night wide-awake and can't go back to sleep. More commonly this occurs early in the morning.   When you have heavier amounts of alcohol, it will knock you out initially and then you wake up all the sudden.

What happens is your body starts producing biochemicals that counteract the central nervous system depressant of alcohol.  When the alcohol wears off, you feel these biochemicals as and feel stimulated.  There is also a lot of toxicity that is occurring and some of those molecules can be stimulating to the body.  The main reason you get those withdrawal symptoms is the shift in your brain to create counteracting forces.  Alcohol is a good example of this but the same thing occurs with things like Xanax.  If you take Xanax or other benzodiazepines, there is a rebound effect.  It's the old adage what goes up must come down.   In this case, what gets sedated must get un-sedated. There is an equal and opposite reaction once you take that substance. Once it wears off,  you rebound in the opposite direction.

This is very clear with people that are taking Xanax or some benzodiazepine on an irregular basis.  For instance, you may take it to sleep on a Monday.  Then you say, I'm not going to take it the next day or two because I don't want to get addicted to it.  On Tuesday you sleep fine but then on Wednesday when you try not to take it is harder. You are feeling really stimulated and cannot fall asleep.  This has to do with the half-life of the drug. Because less of the medication is in your system you are feeling more of these counteracting forces.

Read More on Benzodiazepines and Withdrawal

Keep that in mind different substances can cause this type of anxiety that seems to be coming for nowhere for no rhyme or reason.  It has to do with the half-life of the medication, when you take it, and the contracting forces when it wears off.  The half-life of medications are not always the same for everyone. It is going to be different for each person as there is a little bit of a variance based on each person's genetics.  Generally speak there is a range of hours that it takes 1/2 of the medication to get out of your body. This is referred to as the half life of the medication.

Nutrition As A Physiological Cause For Anxiety 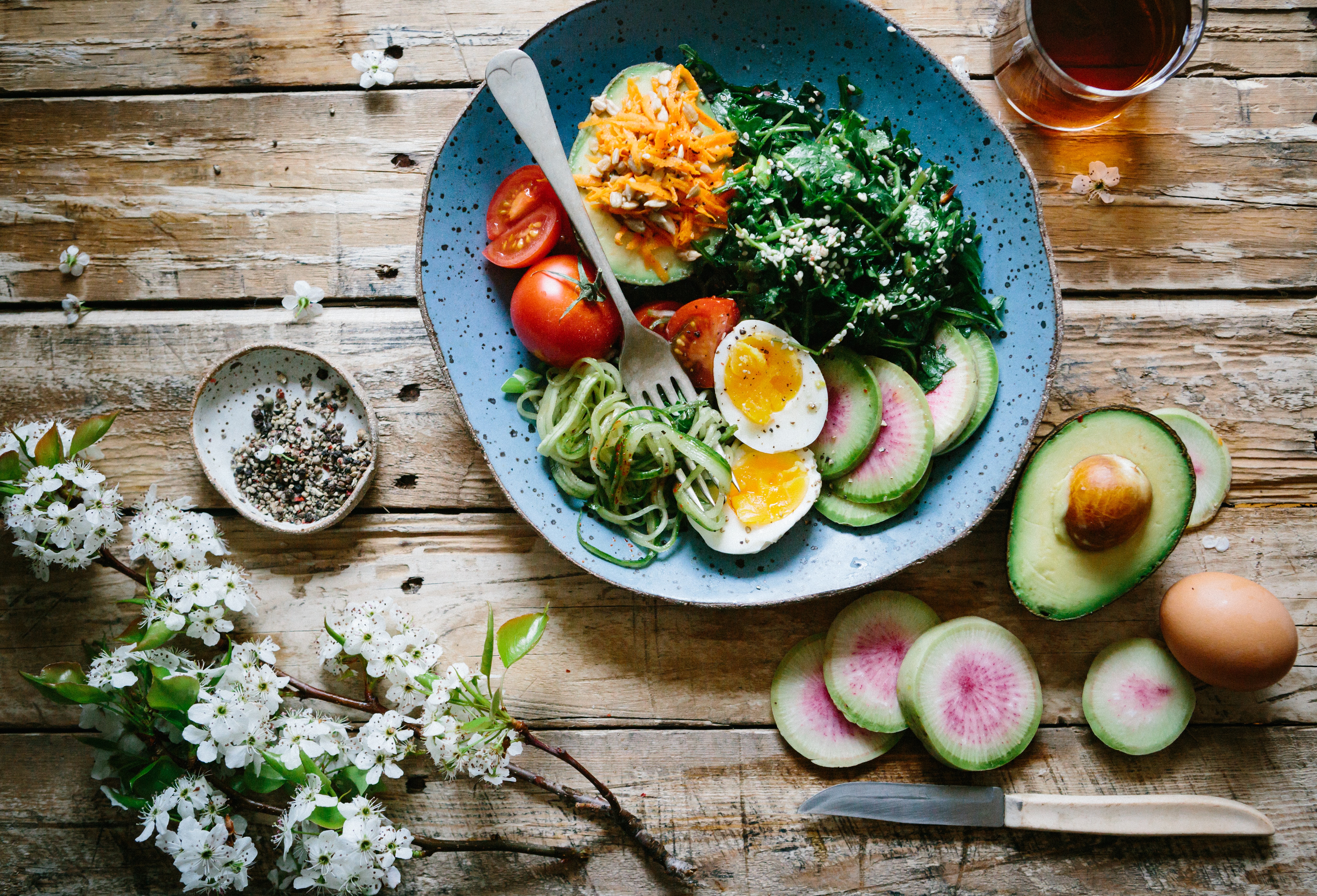 The fifth and final reason to discuss as a physiological cause for anxiety has to do with nutrition.  This one is just as important as all the other ones.  Simple things like dietary changes can sometimes make a big difference on how you feel day to day but they often get overlooked.  One of those things that get missed often is protein intake.  The structure of protein is made out of amino acids and those amino acids are precursors to neurotransmitters.  Neurotransmitters like serotonin, dopamine, and epinephrine come from amino acids. When you don't have enough of these you will feel kind of sluggish and sometimes anxious.  When you consume enough protein you can count on a more even mood. So make sure you're getting enough protein in your diet.  There are different ways you can measure this but typically you need about half of your body weight in grams of protein.  That is at least a good rough target for most people.  If you're under by 10 or 20%, that's probably okay.  If you're working out and doing a lot os exercising, you will need to be on the higher end of that scale.

Also many specific nutrients deficiencies can cause problems with your mood.  The main reason being the nutrients are needed to make certain neurotransmitters.  If you don't have enough vitamin b6, vitamin b12, folate, iron, and different things like this, you may be limiting your neurotransmitter production.  So make sure you're not deficient.

When it comes to anxiety you want look at it as a threshold or spectrum.  These are things that will move you away from the edge of the anxious threshold or spectrum to make sure you're not hitting up against that threshold at all.  To do that we want to remove any potential physiological reasons that may be causing or triggering your anxiety.  If we can remove those you may feel 20-40 % better.  Sometimes removing these physical causes of anxiety can make people 100% better.